Doing Away with the Dogma – What Diet Is Right for You?

I’m often asked about how I make my food choices, especially since it seems like I change the way I eat every now and then.

I’ve been a vegetarian twice in my life, followed a macrobiotic diet, and eaten as a protein type in the Metabolic Typing system.

And whenever I talk about a different approach, people get very curious – how could I, Paul Chek, be changing my diet in what looks like radical ways?

I’m going to answer that question here, but not just to clarify why I eat the way I do. I want to make a larger point – a point about how I think anyone should make choices about what they eat.

Let’s start with my dietary story for some context.

Why I Became a Vegetarian and What Happened When I Did

I was a vegetarian first as a 13-year-old. My mother was a committed yogi for a good 23 years and I was raised with that mindset – a mindset that included a suggested practice of vegetarianism.

Two important teachers for my mother – Paramahansa Yogananda and Rudolph Steiner – suggested vegetarianism as optimal diets, but they both qualified their statements by saying, only when it came naturally and was a healthy thing to do.

I was a vegetarian for six months when I was 13. I became anemic and our Naturopathic Physician told my mother I needed to eat meat. Within one steak I was feeling much better.

I became a vegetarian for the second time a few years ago when my soul guided me to remove all fish, meat, and eggs from my diet. I was guided to eat that way for exactly one year to the day.

This process helped me:

1. Deeply clean myself
2. Develop greater intuitive clarity
3. Evolve in my practices as a shaman
4. Practice what I preach, let go of any dogma, and trust that my soul only knows Love and Truth.
5. Study the effects of a vegetarian diet on my body and mind, and how that diet affected workouts like heavy weight training and rock lifting. I learned so much about myself:

I had to eat a significantly increased amount of beans and legumes. My body also wanted a lot of nuts that previously gave me intolerance reactions. I noticed that when I was a vegetarian, I could eat many things that I couldn’t eat while also eating meat.

I found it MUCH harder to keep muscle mass on. Hard workouts took a noticeably longer time for me to recover from (remember, this is me, and shouldn’t be misread to indicate that all vegetarians will have this response). The harder I trained, the more careful I had to be to get plant foods with high protein and fat content in them or I could watch myself disappearing!

My sex drive diminished significantly, particularly in the last several months of the one-year stint.

6. Cultivate a greater empathy and compassion for others. My feeling nature seemed to be more feminine in general.

I have studied the printed works of Annemarie Colbin, author of Food and Healing, The Book Of Whole Meals and others. I have also studied the works of Michio Kushi, on of the pioneers of macrobiotic dieting in the US. Both of them have excellent information to offer that I’ve included as part of my basic HLC training after exploring them in my own life. This way of eating would be more akin to what Bill Wolcott refers to as a carb type.

After I was most recently a vegetarian, my soul guided me to add eggs and fish to my diet. At this time, I followed the macrobiotic approach as a general theme for six months. Then my soul directed me back to eating meats that worked well for me on an as needed basis.

I found that my recovery from exercise, and my general capacity to handle stress improved. By now, my body really needed the extra nutrients available on a macrobiotic approach that were hard to get with a strict vegetarian approach. Again, this is my individual experience and not a suggestion that everyone will respond this way. That said, my observations about myself fit the pattern I see in my patients. 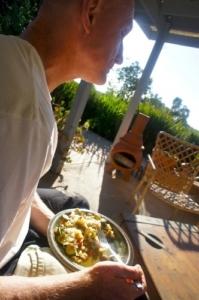 I studied Bill Wolcott’s version of metabolic typing (MT) for several years on my own and in my clinical practice. I also studied many other MT pioneers’ work to explore the differences, and there are a number of them.

In the Wolcott system, I tested out to be a strong protein type, with sympathetic dominance. I ate that way for a long time, but found that I started to have symptoms of excessive protein in my diet, such as aching in my joints, decreased digestive ability, slowing of bowel transit and retention times, craving sweets, etc.

I had to move to eating more as a mixed type to balance.

Then I found that even that was too much flesh food on some days, and I began eating as a carb type. My body seemed to want/need something from each of the MT diet types at different times of the day, week, or month depending on internal and external environmental factors.

So where does that leave me?

No Rules and Inner Guidance or “Flex-a-tarian” Dieting

In synthesis, my whole approach boils down to meeting your individual needs.

This requires that you have access to your instincts, intellect, imagination, and intuition. If you