You Should Squat! Part 1 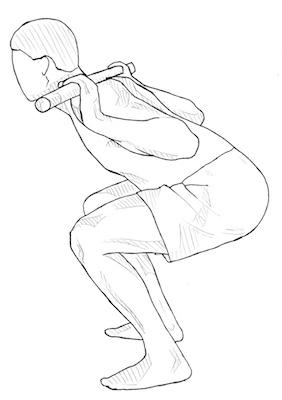 The squat is one of the seven Primal Pattern® movements, the most important movements that are critical to optimal human functioning.

Interestingly, the squat is probably the most misunderstood movement of them all, since many people are told by their doctors, physical therapists and even trainers that squatting is dangerous and should be avoided!

Yet there are some real physiological consequences that your clients must face when following such shortsighted advice.

First and foremost, when it comes to squatting, if you can’t, you must! Just look at what it takes to get into your car. You must open the door and perform the equivalent of a single-legged squat with a lateral shift and a twist, particularly if you own a sports car! This is an activity that most of us do several times a day.

Just sitting down is a squatting movement, albeit an off-balance one for some, since the chair is there to catch them if their leg strength is inadequate to lower them under control.

Having spent more than 20 years of my life in the fields of orthopedic rehabilitation and sports conditioning, I can assure you that anyone who was injured while performing a squat movement in a gym, workplace or sporting environment, and did not learn to squat correctly and develop adequate strength and optimal motor skills in this pattern, is simply a re-injury waiting to happen!

Failure to return to squatting under correct supervision, only results in a weak repair of the injury and a greater likelihood that you will injure yourself again, when you have to squat and least expect it!

In many modern gyms, you can find Smith Machines, leg press equipment of all sorts, hack squat machines and a variety of other devices attempting to deliver the benefits of the real thing. However, there simply is no replacement for the free squat performed with body weight or weighted bar!

Neither a Smith Machine nor a leg press require that you balance your center of gravity over your base of support either, as you have to in a free squat. 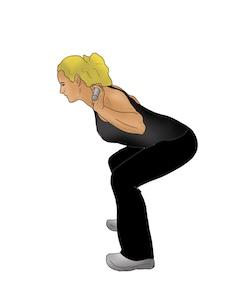 Use these pointers to perform a proper body weight squat:

If you have difficulty keeping your trunk upright, try lifting your toes in your shoes while squatting.

If you find it challenging to perform a free squat as described, there are several ways to make the exercise easier (see the chart below). For example, squat while holding a support, such as a door frame or walking stick, either in one or both hands. This should provide enough additional stability to improve your form.

To reduce the fear of falling, squat over a bench so that if you lose your balance, you will simply sit down on the bench. (Figure 2).

The next level of descent is to perform the squat with the support of a Swiss Ball, carefully placed between your back and the wall (Figure 3). Only if you cannot perform a squat in this way should you even consider using a fixed axis machine, such as a Smith machine. 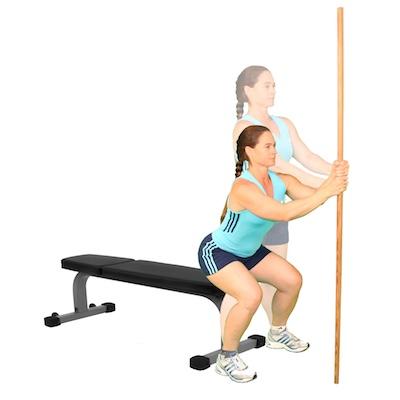