You Should Squat! Part 2

One of the most important Primal Pattern® movements that is critical to optimal human functioning is the squat.

In part one of our series, I showed you how to perform the squat safely, correctly and with greater ease or difficulty depending on your condition, because when it comes to squatting, if you can’t, you must!

There are other critical reasons why you must be able to perform a squat properly which are tied to human digestion and the elimination of waste.

Squatting: Good for Your Insides

Humans are the only animals who must push feces up hill, due to the anatomy of their colons. (Figure 5) In native people who squat to work, socialize or defecate, it is natural to squat down until their hands reach the ground or until the torso is fully relaxed and supported by their thighs (Figure 6). 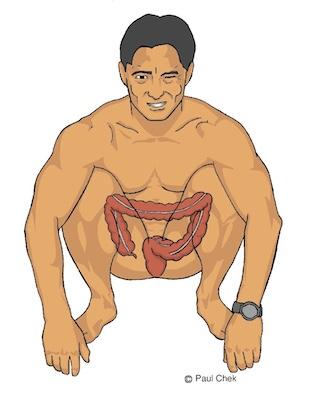 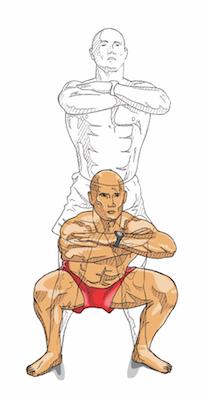 Such a full squat results in the thigh compressing the lower abdomen. Then, the right thigh will compress the cecum (the origin of the colon), mechanically pushing the feces uphill into the transverse colon, while the left thigh compresses the descending colon, moving feces into the sigmoid colon and, ultimately, the rectum.

With this in mind, it is not surprising that many early naturopathic physicians attributed the massive increase in constipation in the late 1800s and early 1900s to Thomas Crapper, the plumber who popularized the toilet (but didn’t actually invent it!).

The modern toilet doesn’t require a full squat, therefore it doesn’t facilitate evacuation of the colon. With chronic constipation, the entire system gets backed up literally from the stomach to the anus. The stomach is forced to hold onto its contents, often leading to reflux, heartburn and poor digestion.

To combat this, colon hygienists recommend the use of a footstool ranging from 6-14 inches tall, placed on the floor in front of the toilet. The addition of the full squat to your exercise program, along with a footstool, can dramatically improve digestion and elimination.

The full squat also helps digestion and elimination due to pressure changes in the abdominal and thoracic cavities and the improved motility of organs.

Whenever you repeatedly perform the full squat, a pressure wave is created by the thighs, compressing the abdominal viscera, and by the action of the diaphragm as you breathe.

This pressure wave, coupled with the mechanical action of the thighs, literally mobilizes the viscera and pumps blood and lymphatic fluids as well as mechanically aiding the intestinal system.

By learning how to perform breathing squats, you can facilitate the parasympathetic nervous system (PNS), which is also called the anabolic or digestive nervous system because it regulates these activities.

Implementing PNS stimulating activities like breathing squats are more important today than ever before. Why? Not only is modern life stressful, we are eating a tremendous amount of processed foods that contain sympathetic nervous system (SNS) stimulants.

Caffeinated foods, sugary beverages and many processed foods in general are powerful stimulators of the SNS, which act as the functional antagonist to the PNS. Too much SNS activity results in poor recovery from exercise, bad digestion and limited elimination!

With those problems in mind, here’s six steps it takes to perform breathing squats safely and properly (Figure 7):